Yesterday morning at 4:45 AM, my alarm clock started buzzing in my hostel dorm room in Rome. I immediately shut it off so as to minimize the disturbance to my roommates.

I have a headlamp I bought from Amazon for these situations. I put my headlamp on and used it to quickly gather my things.

I had showered the night before. This isn’t my favorite thing to do, I feel grimy all day, but my flight was just too early. I stopped in the bathroom and brushed my teeth before checking out of the hostel. I had only stayed one night in Rome – I arrived from Campobasso and took the day to get a few errands done.

I walked the quick two blocks to Rome’s central Termini station. There I boarded a train for the airport. I had a flight to Catania, Sicily at 8:15 AM. After arriving at the airport, the plan was to head to the small town of Alcara li Fusi, where my great-grandfather was born in 1884. I had booked a room in a guesthouse (basically a B&B without breakfast) from May 31 – June 4. I also planned on visiting the nearby town of Longi, where my great-grandmother was born in 1886. (This is my father’s side of the family, whereas the places I went last week were my mother’s.)

Originally, I was going to take an overnight train from Rome the night before. It would have arrived at 8 AM. Then I would board a bus for Alcara. But, last week, I did not enjoy my experience using these small local bus lines in small towns. The hours are infrequent and it’s difficult to find information on them. To travel to surrounding towns, it’s necessary to take two busses – one bus to the nearest larger town, a “hub,” and then another bus to the other small town. I was nervous about making a mistake and getting lost or stranded.

So, I decided this time I would rent a car. I booked the car last week and the pickup of the car was at the Catania airport. I checked for flights to Catania from Rome and snagged one for only about $50, so I decided to just let my train ticket (non-refundable) go unused and fly to Catania instead.

I arrived at the airport and boarded my flight. I slept for must of it, but I did wake up at one moment, look out my window, and see the very recognizable Mount Vesuvius, and also Naples, Capri, and the Amalfi Coast. My cellphone camera didn’t do the view justice (it usually doesn’t) but here you can make out Vesuvius in the center of the picture: 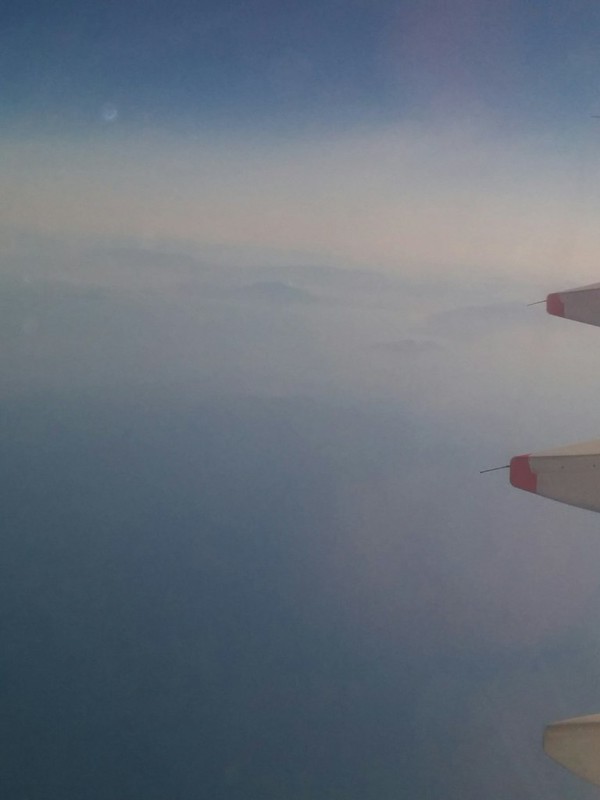 We landed in Catania after only about an hour and fifteen minutes in the air. 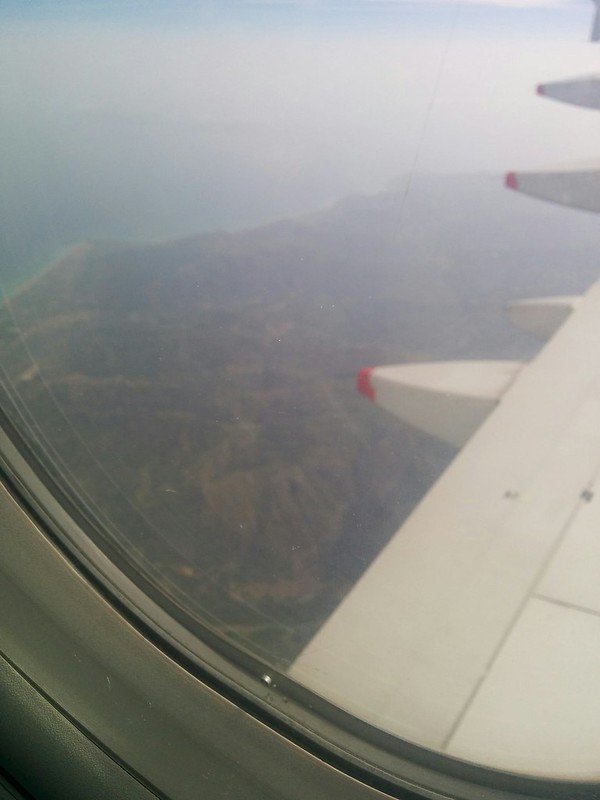 There we were greeted by another volcano, Mt. Etna. 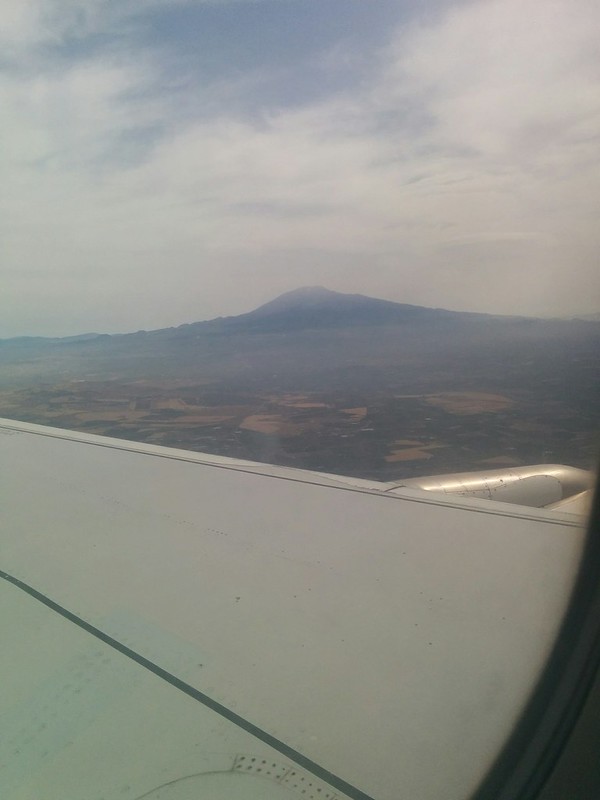 I had a few hours after the plane landed before my rental was available, so I sat down and relaxed for a while. Then I went to an airport snack bar to have a sandwich. I also connected to the airport WiFi and started looking at maps to figure out how to drive to Alcara. I purchased a car charger for my phone and downloaded offline maps, so I could use it as a GPS even if I lost cell phone signal.

Then, I proceeded to the car rental desk and picked up my wheels. I’m now a proud temorary driver of a Skoda Octovia hatchback. (I’ve never heard of it either, but I looked it up and it was originally a Czech company but now is owned by Volkswagen.) It’s an automatic, which I needed to reserve especially, but I’ve never driven a stick. 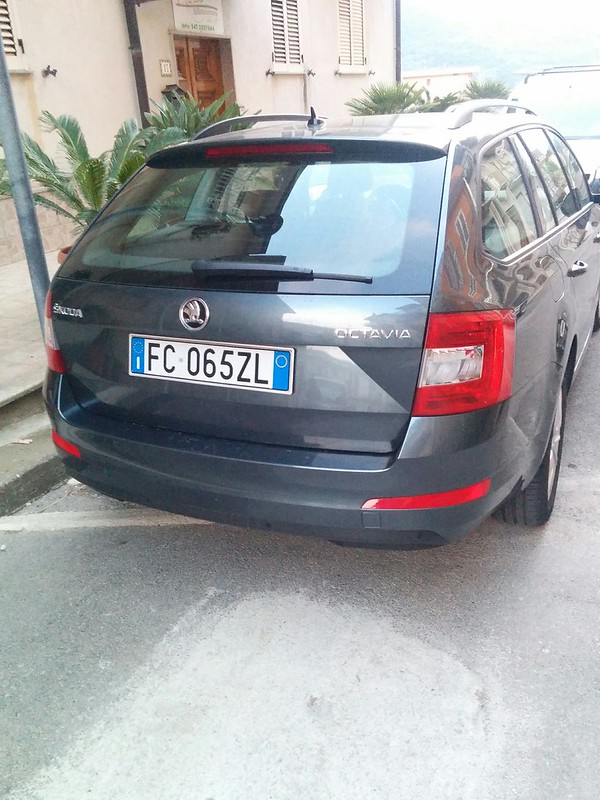 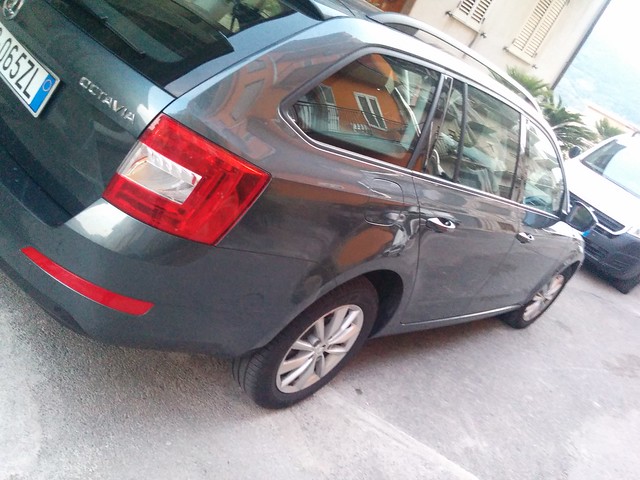 My drive was decently long. I had about 2 hours and 10 minutes on the autostrade (similar to our interstate highways) before a 30 minute drive into the mountains where Alcara is located.

I was nervous about the drive. I decided to pay extra to buy down the insurance deductible to near zero – if only for piece of mind. The autostrade were going to be easy to drive on but I was afraid of getting off at the wrong exit or breaking some rule of the road that’s different from what we have at home. Italian drivers have a certain reputation for aggression so that added to my fear. Finally, after exiting the autostrade I had to drive along windy mountain roads to reach my destination:

But I made it. My phone-as-GPS worked the whole time which was good, and I made it. 99% of it wasn’t bad at all. The worst part was travelling through Militello Rosmarino, seen in the upper left in the above map. The center of the town had such narrow streets that if another car had come the other way somebody would’ve had to go in reverse. But I made it through without such an instance. I’m not looking forward to driving back through there, though.

It also was a beautiful drive. Unfortunately, I obviously couldn’t take pictures, but Sicily is gorgeous. The autostrada was lined with pink and purple flowers and palm trees, and for much of the drive I could see the Mediterranean Sea on my left. The toe of mainland Italy is also easy to see when you pass by. Finally, as you drive you always can see jagged, green mountains or rocky cliffs when you look inland. Since I don’t have any pictures, I’ve taken some from Google’s Street View for you:

Eventually, I made it up the windy mountain roads and into Alcara. I was now worried about parking. But, I found a space right in front of the guesthouse, parked, and checked in. It’s a nice little single room with a gorgeous view of the mountains. 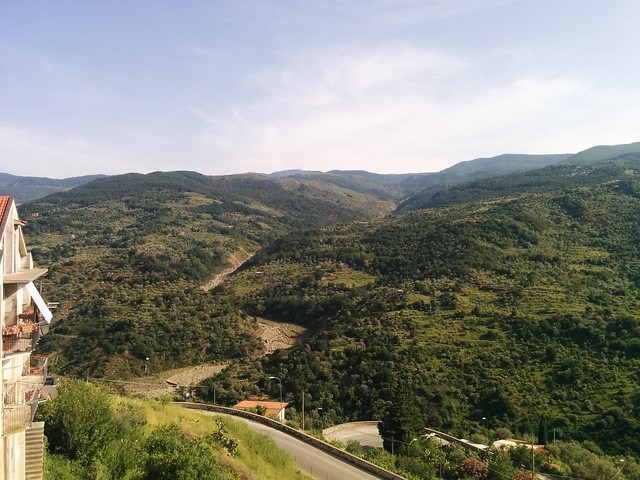 So, I made it to Alcara li Fusi, and so far I like it here. (More to come on the town.) But, transportation, rather rental car or local bus, has definitely stressed me out over the past week or so. I will definitely feel relief on Saturday when I return my rental car to the airport in Catania. After that I’m going to visit the main tourist destination cities and sights in Sicily, which should have adequate and easy to use public transportation.

One thought on “Journey to Alcara li Fusi”