On August 7, I boarded a flight from Ireland to Portugal. I decided on Portugal because it was a well priced flight and it was on the way back to Italy, where I’m visiting my host family next week.

I wanted to relax and enjoy some good weather and beaches at the end of my trip, and so far, so good. I’m at the very southern tip of the country, the Southwest corner of Europe. See the blue dot for my location. 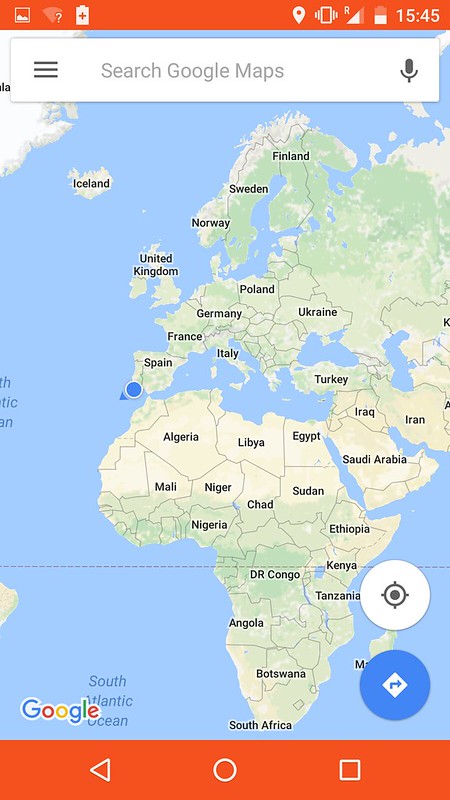 I’m in Lagos. It’s a resort town, filled with vacationers from all over Europe. I’ve been spending my days mostly at the beach, including one day surfing with two guys from Spain who I met in the hostel. Portugal is the surfing capital of Europe because it’s south and it has access to the Atlantic Ocean for bigger waves than the Mediterranean Sea. Also, the beaches are much sandier, in general, than those I saw in Italy, presumably due to the bigger waves. (Though, I hear that beaches in Puglia (the heel of Italy) and also the island of Sardegna are very beautiful.) 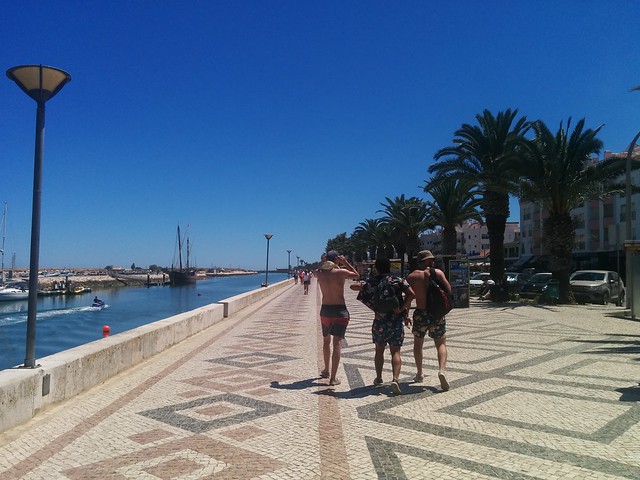 The culture and the look of things, I should mention, are more similar to Italy than anywhere else I’ve been since Italy. I could tell when I got off the plane and it made me happy. The first night I went to a local food festival and ate a typical Portuguese dish, pork and clams. Portuguese food in general seems to be similar to Italian food as far as very flavorful meat and fish, but not similar at all in terms of carbs. There’s no pasta and you’re just given some potatoes with your meat or your fish. Then again, I’m no expert, I’ve only been here a few days. 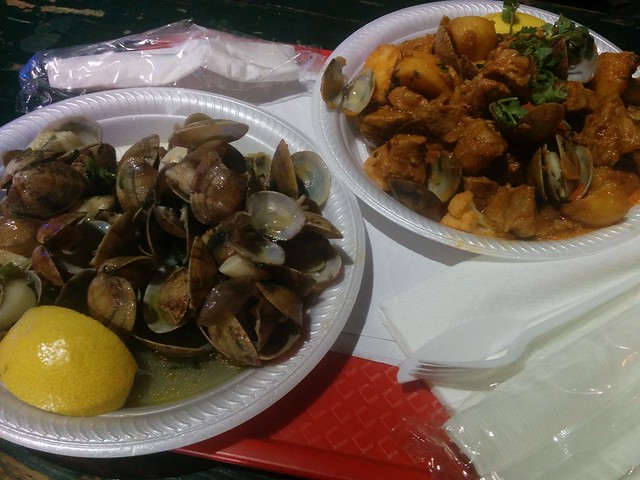 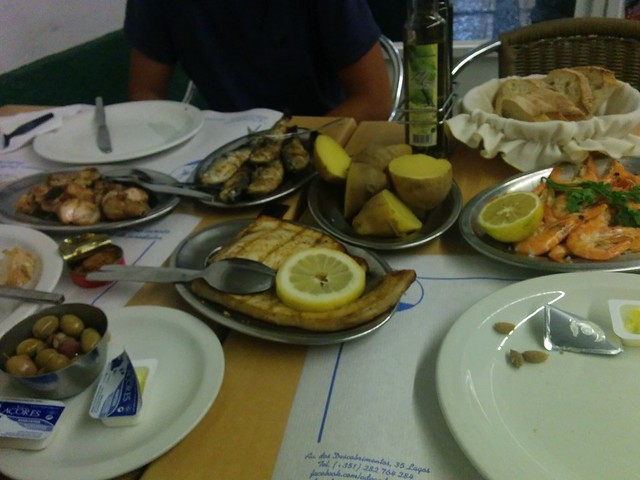 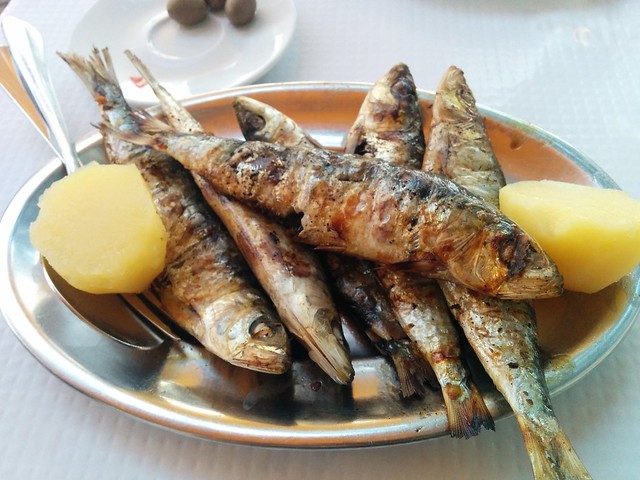 I also visited Cape Sagres which is the literal southwest corner of Europe. Back in the flat earth days this was considered to be one of the ends of the earth. There was a school for navigators here and some of the great explorers studied there like Columbus and Magellan. Some of you may remember from history class that Portugal was instrumental in the age of exploration and those days were Portugal’s glory days for sure. This picture is me at the literal end of Europe. As a geography aficionado I really enjoyed going there. 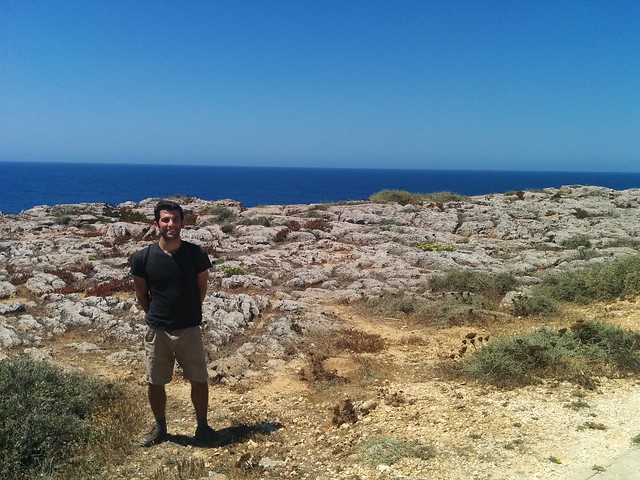 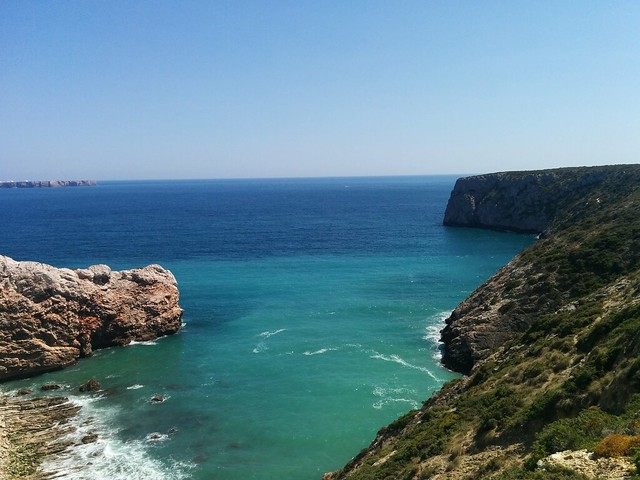 Also of note near Sagres, the “last hot dog before America.” 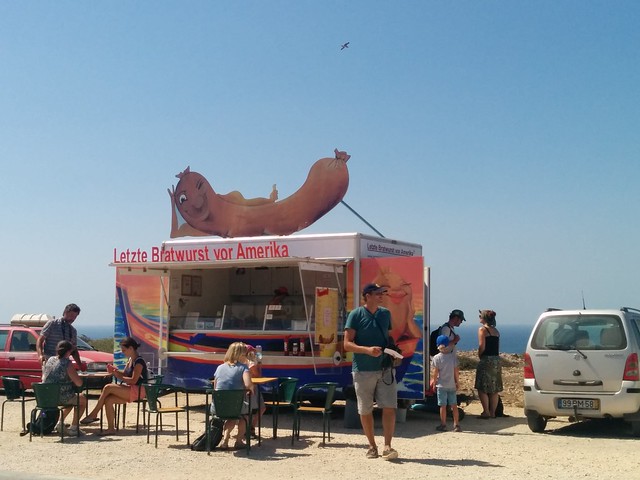 I’ve spent several days just alternating between swimming in the ocean and sitting in a beach chair with a book. The water is blue and a nice temperature, and it’s very refreshing just to let the waves go by. 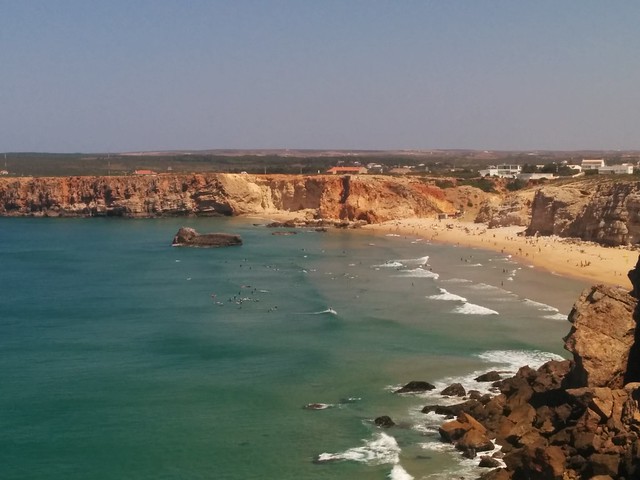 Next I’m going to make my way to Lisbon, the capital city, and then Madrid, Spain by train. From Madrid I take a plane back to Torino to visit my host family.